Last week a small celebration was held in New York City to recognize all the many good people who contributed to the victory over NYC to stop the unconstitutional and immoral Gravity Knife arrests and prosecutions of honest folks carrying common folding knives.

Here I am shown presenting Assmeblymember Dan Quart with his Freedom's Edge™ award. His tenacity and perseverance were key to getting the state's Gravity Knife Ban repealed.

Thanks to New York's own @kabarknives for donating the awards for the evening. Everyone left with a specially engraved KA-BAR Jarosz Spear Point folder which could have gotten anyone in New York City arrested and prosecuted, potentially for a felony, just a couple months ago. On the front of the blade is engraved May 30, 2019 #FreeThenKnivesNYC and the back side has the Knife Rights logo.

Below some of the attendees posed for a photo after the event. 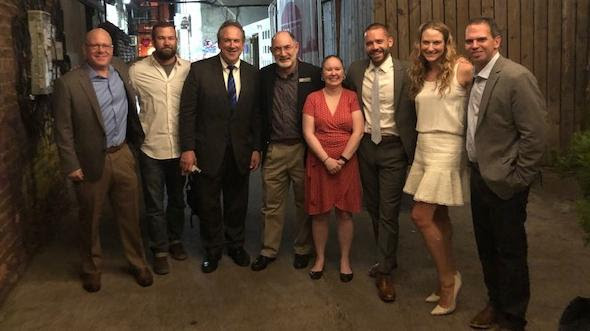 Knife Rights will continue to work to make it easier for honest knife carriers to safely carry their knives in and through NYC. Just last week, Knife Rights and Legal Aid Society filed an Amicus Brief in a disturbing effort by DA Cyrus Vance, Jr. to victimize knife owners again.

With 31 bills enacted in 22 states since 2010, Knife Rights is rewriting knife law in America!