BIRMINGHAM, Ala. – Sportfishing’s biggest stage was used to recognize the incredible philanthropic work done by anglers around the country when B.A.S.S. honored the inaugural winner of the C.A.S.T. for Kids B.A.S.S. Humanitarian Award during the Academy Sports + Outdoors Bassmaster Classic presented by Huk.

2020 award recipient Chris Rambough, of Meridian, Idaho, was selected by a panel of judges from a strong field of nominations for his deep commitment to encourage kids of all ability levels to get outdoors. Among Rambough’s accomplishments are two decades of involvement with C.A.S.T. for Kids events for special needs children, creating a youth program for Payette River Bassmasters and personally mentoring kids in his community.

“I may be the man in front but my amazing wife and best friend, Stacy, is every bit as deserving as I am,” said Rambough of the award. “She walks hand in hand with me doing the things we do. This is a WE award, not a ME award! There is a huge number of family, friends and organizations that provide the necessary support to do what we do.”

“What makes Chris different than others, but what makes him stand out above all the rest, is his humility in his service.”

Rambough credits his father, Harold Vaughn, for introducing him both to bass fishing and to the C.A.S.T. for Kids program. In fact, after the Black Canyon, Idaho C.A.S.T. for Kids event lost its funding in 2018, Rambough and his wife funded the entire event in Vaughn’s memory.

“He was the epitome of caring and sharing,” Rambough said of his father. “Every person should strive to be what he was.” 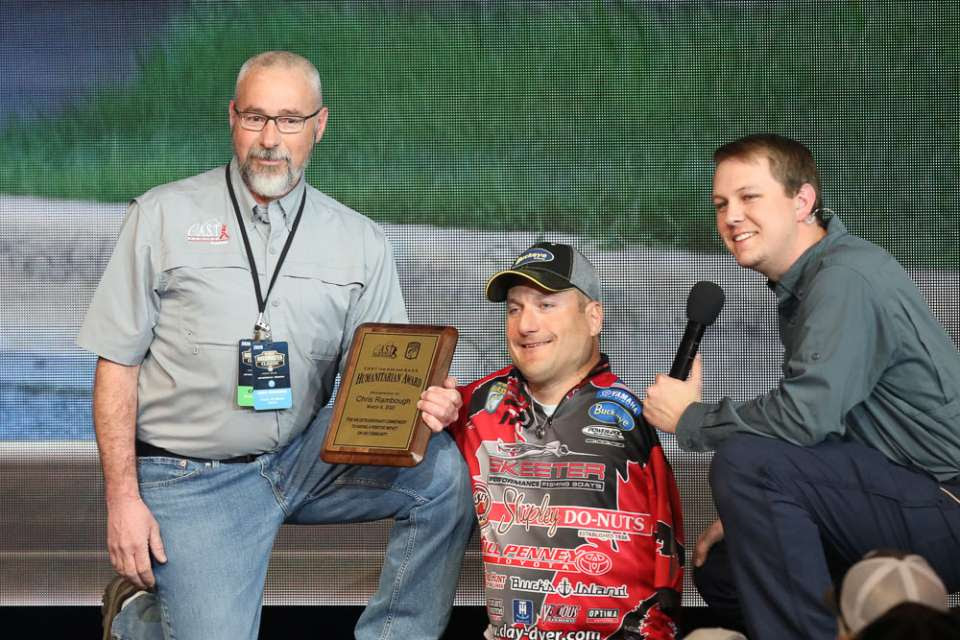 The C.A.S.T. for Kids B.A.S.S. Humanitarian Award was established to honor one B.A.S.S. member who has demonstrated an extraordinary commitment to serving groups such as children with special needs, veterans, abuse survivors or any people who need extra help and support.

“It was very inspiring to read the stories of all the wonderful nominees for this inaugural C.A.S.T. for Kids B.A.S.S. Humanitarian Award,” said Executive Director of the C.A.S.T. for Kids Foundation and Bassmaster Elite Series pro Jay Yelas. “There were many deserving people nominated, but Chris Rambough stood out for his tireless work with the Idaho B.A.S.S. Nation and the youth in his community over the last couple of decades.

“I am thrilled to congratulate Chris and thank him for making a difference in the lives of youth in his community.”

About C.A.S.T. for Kids
The C.A.S.T. for Kids program has been proven to enrich the lives of children with special needs by hosting events that prove children with disabilities can accomplish anything. These events allow them to enjoy a unique fishing and boating event, one where they can leave their cares on shore and feel “normal” for a day. The events have many lasting benefits. The kids feel genuinely loved, valued and accepted by their community, and are celebrated as winners at an awards ceremony. The Foundation has seen tremendous positive improvements in growing their social skills and overcoming behavioral issues through their interactions at events with community volunteers and children of similar disabilities. Encouraging the kids with a team-oriented approach, the C.A.S.T. for Kids Foundation has enhanced the lives of over 120,000 kids over the last three decades. To learn more, visit castforkids.org.

About B.A.S.S.
B.A.S.S. is the worldwide authority on bass fishing and keeper of the culture of the sport, providing cutting edge content on bass fishing whenever, wherever and however bass fishing fans want to use it. Headquartered in Birmingham, Ala., the 515,000-member organization’s fully integrated media platforms include the industry’s leading magazines (Bassmaster and B.A.S.S. Times), website (Bassmaster.com), television show (The Bassmasters on ESPN2 and The Pursuit Channel), radio show (Bassmaster Radio), social media programs and events. For more than 50 years, B.A.S.S. has been dedicated to access, conservation and youth fishing.