NOAA Scientists Report on Blue Holes in Gulf of Mexico

Blue holes are underwater sinkholes, similar to sink holes on land. Underwater sink holes, springs, and caverns are karst (calcium carbonate rock) features that are scattered across Florida’s Gulf continental shelf. They vary in size, shape and depth, but most are ecological hot spots with a high diversity of abundance of plants and animals.

In May and September 2019, a team of scientists from Mote Marine Laboratory, Florida Atlantic University/Harbor Branch, Georgia Institute of Technology and the U.S. Geological Society, with support from the NOAA Office of Ocean Exploration and Research, explored one blue hole, dubbed “Amberjack Hole,” approximately 30 miles offshore west of Sarasota. In August 2020 and May 2021, a second deeper location, Green Banana, will be explored.

The 2019 work was the team’s most detailed blue hole investigation to date, as they deployed divers and a “benthic lander”—a framework holding multiple scientific instruments collectively weighing more than 270 kilograms (600 pounds)—into Amberjack Hole, whose bottom extends deeper than 107 meters (350 feet). The team documented life around the rim of the hole and carbon, nutrients, and microscopic life throughout the hole and in its bottom sediments.

A blue hole can be an oasis in an otherwise barren seafloor. Blue holes are diverse biological communities full of marine life, including corals, sponges, mollusks, sea turtles, sharks, and more. The seawater chemistry in the holes is unique and appears to interact with groundwater and possibly aquifer layers. This link contributes to the knowledge of carbon cycling between surface and groundwater.

Little is known about blue holes due to their lack of accessibility and unknown distribution and abundance. The opening of a blue hole can be several hundred feet underwater, and for many holes, the opening is too small for an automated submersible. In fact, the first reports of blue holes did not come from scientists or researchers, but actually came from fishermen and recreational divers. Now, the two groups are working together to conduct scientific surveys and exploration of these mysterious holes.

What Can We Learn?

We don’t know much about blue holes, so many exploratory questions remain. From this “mission,” scientists are hoping to learn:

The rim of Amberjack Hole is 34 meters (113 feet) from the surface, and the rest of the hole extends down another 72+ meters (237 feet)! In May 2019, scientific divers traveled to the bottom of Amberjack Hole and deployed a special benthic lander created for this project to measure nutrients and carbon-based compounds right where bottom water meets the sediment for extended periods of time. In September, the team returned and collected 17 water samples from just outside the hole down to the bottom and collected 4 sediment cores at the bottom. Remarkably, they also discovered two dead but intact smalltooth sawfish, Pristis pectinata, an endangered species, at the bottom of the hole. One of the animals was subsequently recovered to undergo a necropsy.

Divers found two deceased smalltooth sawfish, an endangered species, at the bottom of Amberjack Hole. The deceased sawfish were intact enough to be collected for research, and Mote scientists quickly reported the discovery to NOAA and the Fish and Wildlife Conservation Commission and obtained the required permit for collection of one of the sawfish, a male measuring an impressive 12 feet long. Video courtesy of Mote Marine Laboratory. Download larger version (mp4, 12.3 MB).

Water samples collected by divers and the lander yielded microbes whose DNA was extracted, processed to isolate specific marker genes, and analyzed. Scientists found that the microbes in the hole are layered, with different genetic varieties at different relative abundances among the top, middle and bottom layers of water. Next, they will sequence the full genomes of the microbes to gain a better understanding of the organisms.

Analysis of collected samples has also shown that the water and sediment in Amberjack Hole have huge amounts of dissolved inorganic carbon, which can support some kinds of life—including microbes. These microbes may play an important role in the global carbon cycle by returning carbon into the environment in a form that other organisms can access.

The team was also able to document nutrient flux from the bottom sediment into the water, suggesting that nutrients are coming up from the blue hole, fueling primary production above the hole, and in turn, a whole cascade of larger organisms. And, in turn, some carbon/nutrients ultimately cycle back to the sediments as detritus, fueling additional fluxes and restarting the positive feedback cycle. This could explain why blue holes support such a diversity of life. 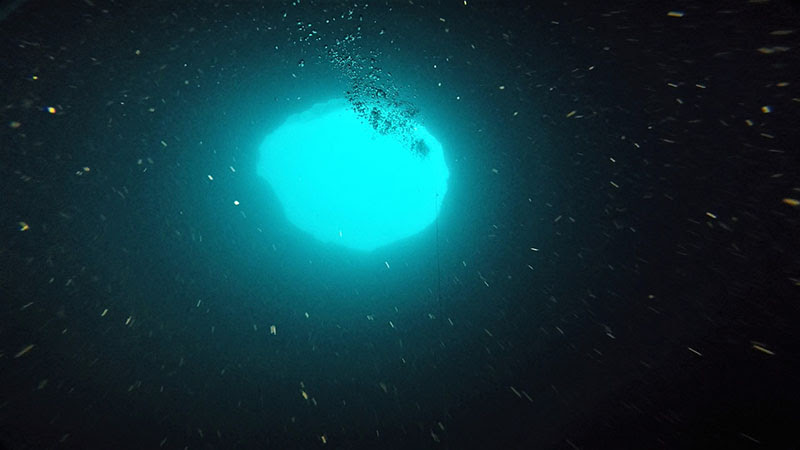 Water sampled inside the hole was found to contain naturally occurring isotopes of radium and radon, two markers of groundwater. This suggests that blue holes are not isolated from groundwater and could provide further insights into any potential groundwater connection between the Floridan Aquifer and the Gulf of Mexico.

In August 2020 and May 2021 a second deeper site, Green Banana, will be explored using the same techniques developed for the Amberjack Hole. The rim of the Green Banana is 47 meters (155 feet) below the sea surface and the bottom is at a depth of approximately 130 meters (425 feet). The configuration of the hole is somewhat hourglass shaped, creating new challenges for the lander deployment and water sampling. The first trip is scheduled for August 2020, and work will continue in 2021.