Bassmaster Elite Series pro Kyle Monti, of Okeechobee, Fla., gifted a young angler named Gabriel with this rod, which he would use to catch a personal best on Lake Eufaula.

EUFAULA, Ala. — Bassmaster Elite Series pro Kyle Monti could have never imagined the good that would come from a stop at a convenience store in Eufaula, Ala. Monti was in town for the DEWALT Bassmaster Elite at Lake Eufaula, when he pulled into the store to pick up ice for his day of fishing. What happened next left a lasting impression on a young angler.

The only other customers at 4:30 a.m. were a father and his son. The child was starstruck when Monti walked in but reluctant to engage in conversation. Monti broke the ice and spoke to him in the universal language of fishing. The two chatted and the youngster, a 10-year-old named Gabriel, asked for Monti to autograph his cap. 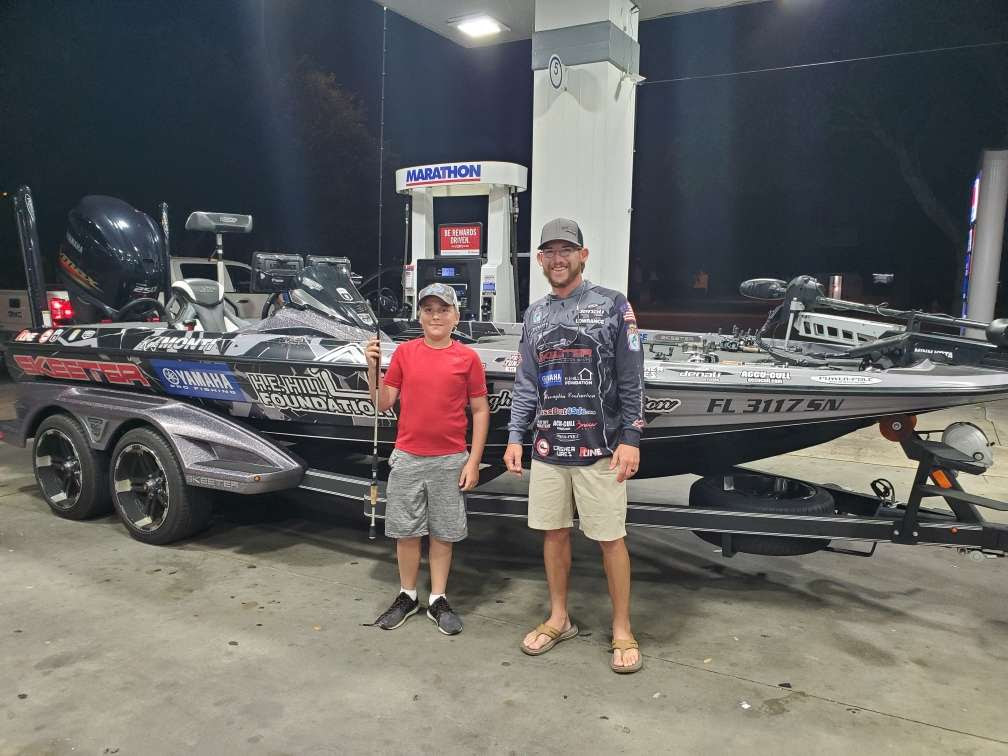 Monti went back to his truck to retrieve a pen, but there was none.

“Gabriel was shy at first but opened up when we started talking about fishing,” recalled Monti. “I felt really bad that I couldn’t give him something to remember our visit.”

As Monti reluctantly walked back to the store, he noticed their boat, a small aluminum rig with only a couple of rod-and-reel combos inside. He went back to the truck and retrieved a brand-new Denali Lithium 6-foot, 10-inch Medium/Heavy Spinnerbait Rod, thinking it was just the right size for Gabriel.

“I thought that maybe he would remember a new rod more than an autograph or a hat,” said Monti.

He did. Later that day, Gabriel and his father located Monti on the lake and stayed to watch him compete. Monti gave him a shout-out while being interviewed for Bassmaster LIVE. When finished, Monti packed it up and ran to the next spot. As he sped down the lake, Monti looked back to see their boat following him from a distance.

“I was running brushpiles, and it took them 30 minutes to get to where I went in five minutes,” added Monti.

Gabriel and his father showed up at the weigh-in, and what happened next punctuates the good of this story and the impact the Elite Series pros have on young anglers.

Gabriel proudly showed Monti the picture of a largemouth weighing 7 pounds, 15 ounces, caught on the rod earlier that day. It was Gabriel’s personal best.

“I couldn’t believe it,” said Monti, who finished the event in 15th place. “The kid caught a bass heavier than any of us did after four days of fishing on Lake Eufaula.”

Beyond the bling, this youngster has a lifelong memory and gained a new friend and mentor in Monti.

About B.A.S.S.
B.A.S.S. is the worldwide authority on bass fishing and keeper of the culture of the sport, providing cutting edge content on bass fishing whenever, wherever and however bass fishing fans want to use it. Headquartered in Birmingham, Ala., the 515,000-member organization’s fully integrated media platforms include the industry’s leading magazines (Bassmaster and B.A.S.S. Times), website (Bassmaster.com), television show (The Bassmasters on ESPN2 and The Pursuit Channel), radio show (Bassmaster Radio), social media programs and events. For more than 50 years, B.A.S.S. has been dedicated to access, conservation and youth fishing.