It might sound strange, I’m one of those apparently early technology adopters who really isn’t. Yes, I test and evaluate a lot of new equipment, but after out my hunting pack proves that while I appreciate new equipment, I’m reluctant to change proven gear. If it works for me, I keep using it.

Whenever I write about products, that’s the criterion I use. Whether I’m evaluating guns, knives, hammers, tents, pack, whatever, everything is evaluated from my particular viewpoint. That’s why your mileage may vary.

The gear that gets put into immediate service makes it easier for me to move around. As my joints steadily deteriorate, the lightest boot that still keeps my feet warm is a never-ending quests. Ditto the latest high-tech clothing that can resist moisture, handle rough wear and keep me either warm in winter or cooler in summer. Like hats, they go into almost immediate services.

But the tools I use afield don’t get replaced unless something is demonstrably superior in one key test it’s no more difficult to operate. For me, user-friendliness is the ultimate acid test. Gear that slides right into place in your hand, on your back or against your cheek. No buttons, menus or activation switches need apply.

For me, simple - after tuning as close to my personal preferences as possible- is good. Once I get things adjusted, I want them to lock down and stay there.

Last week, a Bushnell Prime 1700 rangefinder unexpectedly showed up at my front door. It has been a long time since I’ve seen new product from Bushnell. So long, I presumed I’d been purged from their T&E lists by their new ownership.

But I was immediately intrigued because my current rangefinder lives inside an aging set of Bushnell binoculars.

They’re definitely showing our age. I’ve tested and borrowed others - and they’ve all been good, but my old ones have been just fine out to 300 yards - the range where I’m going to be comfortable shooting at animals.

But I don’t just hunt- I shoot- often at ranges far beyond my 300 yard critter limit. Bushnell’s new rangefinder had hit the glaring hole in my shooting- a lightweight rangefinder for longer distances. Everything I’ve used before has been either too-heavy or too-expensive.

The Prime 1700, weighs 5.9 ounces and carries an equally lightweight MSRP of $199.99. Even with my aged, but lightweight spotting scope, I would be carrying roughly the equivalent weight of my old range finding binoculars. Equivalent weight and significant improvement are win/wins with me. 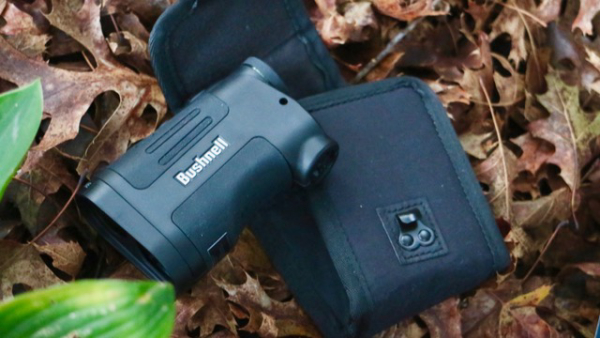 Bushnell’s new Prime 1700 rangefinder offers reliable ranging well beyond the shooting capabilities of most of us- and in a variety of lighting situations. Jim Shepherd/OWDN photo.

Granted, the new rangefinder required some setup, but once I plowed through the menus with the help of the online manual, I had a rangefinder that was field-ready. That’s when I realized the real strength of this rangefinder.

It’s bright. As in how-do-they-get-that-kind-of-light-transmission-bright. According to Matt Rice at Bushnell, it’s because these new rangefinders use an all-glass optical system with an enhanced LCD display and 40% larger objective lenses to allow more light in. 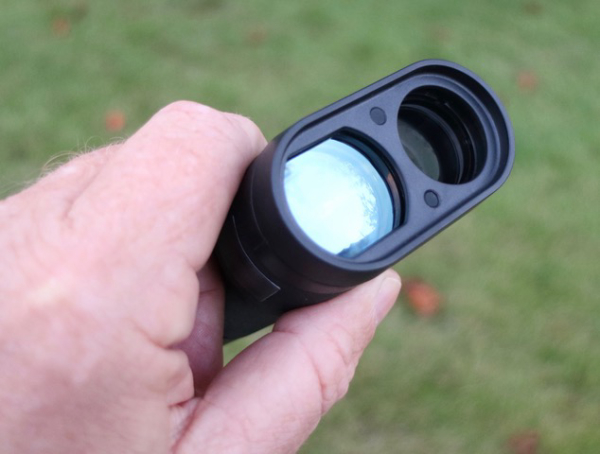 According to Bushnell, it allows their newest rangefinders (the Prime 1300 and Prime 1700s) to be as much as two times brighter than competitive models in this class. The slick announcement package even included a test target to demonstrate the light transmission capabilities. The instructions said at sunset to “hang at a distance of 50 to 75 yards, then use the Prime 1700 rangefinder to see just how clear and bright the deer is.”

I hung it from a neighbor’s fence at a range of 64.5 yards and waited for the sun to drop. Since the target was hung to the west of me, it wasn’t just behind heavy brush, it was backlit (I like adding wrinkles to manufacturer’s test suggestions).

When I looked through the 6x24mm lens, what I saw wasn’t just sharp, it was bright. In fact, I used one of my telephoto lenses as a comparison and the difference was obvious. The rangefinder was brighter.

These new rangefinders also come with Bushnell’s Angle Range Compensation (ARC) system, compensating for the up or downhill angles frequently encountered in shooting. If you’ve ever shot over the back of a deer from a tree stand, you that a failure to compensate for the angles is why you shoot over the top of a target. Your eye perceives 47 yards of distance to the target because of the downward angle, when the true distance to the target is only 35 yards.

For the sake of clarity, Bushnell isn’t positioning their new range finders as long-distance rangefinders. The specs clearly say give a maximum effective deer range of 700 yards. The reflective range is significantly further, (1760 yards/1609 meters), so it’s not unreasonable to expect to accurately range targets at 1000 yards. But like any other piece of gear, your results may be better -or worse- than mine.

There’s considerably more technology under the hood on these rangefinders, from your choice of ranging method to ballistic group guides for rifle calibers from .22-250 Remington to .300 Weatherby Mag and blackpowder/muzzleloaders to help with bullet drop compensation.

Lots of technology in an affordable package. It really is a great time to be in shooting sports.