Clouds In The Crystal Ball

Yesterday, the National Shooting Sports Foundation (NSSF) hosted a pair of webinars that looked at the outcomes of last week’s national and state elections and the likely potential impacts that might have in the year ahead.

With the Democratic party now in control of the House of Representatives, the unvarnished truth is that gun owners and the firearms industry should expect noting positive. After all, presumptive House Majority Leader Nancy Pelosi has guaranteed that “we’re going after guns right out of the gate.”

The last thing the House is going to approve will be the rights for citizens to move around freely with guns, especially guns with “silencers” on them.

So what might we see? How about House-passed legislation that would limit magazine capacities, restrict modern sporting rifles, ban “bump stocks” and 3D printing technology while mandating “smart gun” technology. And a restoration of funding for anti-gun research. Another likely candidate for introduction and passage: age-based gun bans.

Republicans control of the Senate should prevent the majority of these ideas from becoming law. I say should because there’s no guarantee that some of this legislation won’t get enough bipartisan support to pass both sides of Congress. 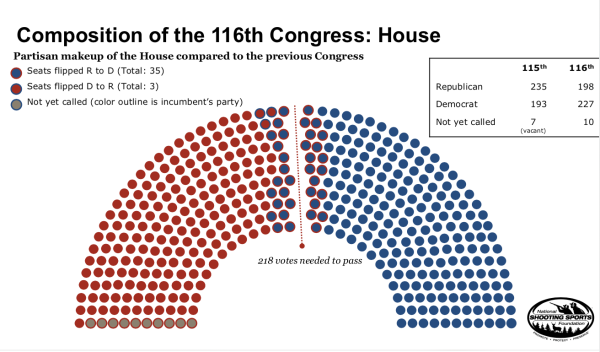 The political makeup of the House (above) and Senate (below) indicate the best the industry can hope for over the next two years is a series of hotly-contested ties -and an unending series of hearings from the House of Representatives. NSSF images 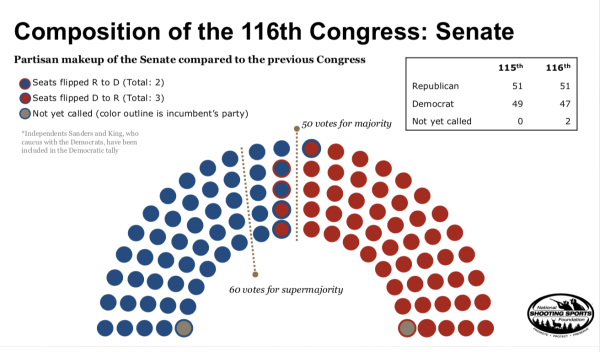 On the state side of the political ledger, the picture is no more optimistic. In fact, there’s little that anyone can do to reverse the likely legislative initiatives against guns and gun owners in California, Illinois and New York. In those states, Democrats who have run on platforms of gun control, now hold both the governorships and super-majorities in their upper and lower houses. Legislation passed there will be veto-proof.

In fact, the NSSF’s Jake McGuigan says the loss of “firewalls” - shifts in the makeup of legislatures now mean fewer safeguards against irrational gun legislation. In addition to California, Illinois, and New York, Colorado, Connecticut, New Mexico, Nevada and Oregon now lack enough votes to derail anything from increases in the minimum age of gun ownership to outright bans on categories of guns, magazine capacities or mandated microstamping.

From the NSSF’s perspective, it seems we can look forward to a long list of gun control policies on the state level in 2019. Broken out by policy and state, here are a few:

So what does all this mean?

If you’re a company located in California, Colorado, Connecticut, Illinois, New Mexico, New York, Nevada or Oregon, it’s likely that 2019 is when newly-elected officials will commence efforts to regulate you out of business - or try to make it impossible for you to exist there. And they’ll be using your tax dollars to fund those efforts. I’d be reminding my employees that their tax dollars will be helping fund the efforts to put them out of work, too.

There were state wins last week. North Carolina’s passage of a state constitutional right to hunt, fish and harvest wildlife is one example of positive legislation designed protect our heritage, not constrain it.

Nationally, everything isn’t bad. The Senate still must pass House legislation -and the Senate is still in control of the more conservative elements -barring another national tragedy, that is.

But this “new” House of Representatives has promised that “where they can’t legislate, they’ll investigate.” So it’s reasonable to expect seeing plenty of industry faces testifying before hostile committee chairs starting in 2019.

As we hear newly-elected officials telling anyone who’ll listen they’re going into office charged up to pass new “gun laws” it brings up a question: now who speaks for gun owners, hunters, recreational shooters or even people who don’t think that owning a gun automatically means you should be subjected to what are, in effect, discriminatory laws?

You do. That’s never changed. And it’s time that everyone who believes in the right to keep and bear arms step up and demand that legislators - all legislators, from the local courthouse to Congress- start to address the “other” problems blamed on the tools rather than the disturbed people using them.