For a twenty-second year, I find myself sitting in front of a blank computer screen wondering what I can say about being “thankful” that I haven’t said before.

The most honest answers after the rolling disaster that has been 2021 would be either “everything” “nothing” or maybe “everything and nothing.”

I’m thankful for “everything” good that has happened for my family in what has been a disastrous year for some. I’m grateful “nothing” terrible (at least to this point) has befallen us. My qualification comes, not because I’m a pessimist, but have finally accepted the truth that none of us is ever more than our next breath away from eternity. I’ve decided to enjoy as many of those breaths as possible.

None of us expected the “virus thing” would still be with us after totally wrecking our last holiday season. Nor did we expect to see the kind of lawlessness most of us consider the purview of the third world happening in streets many of us have walked.

We didn’t expect gas prices to skyrocket, or decent jobs to go vacant because no one wanted them.

Don’t even get me started on the global breakdown of the supply chain. 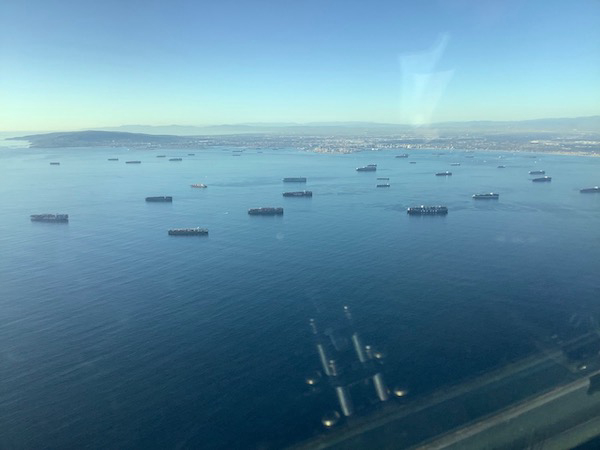 This photo, taken by a California reader on November 13, shows just how backed up our supply chain really is. The side-by-side anchoring off Long Beach/Los Angeles harbor is called “double parking.” The parking lot runs some twenty-six miles - out beyond Santa Catalina island. Photo with permission.

There have also been some totally unexpected personal concerns that morphed into blessings.

An alert on a smart watch that sent me to the doctor for a routine checkup. It revealed much larger problems.

The inconvenient warning was a blessing in disguise. Both problems have been handled, now I feel better than I have in years.

Years ago, a very wise man told me that what determined your true quality of life wasn’t the problems you had, it was how you responded to them.

Today, I realize just how true that statement really was.

Life really is about how you respond to things.

If you see someone in need, do you help or walk away? Depends.

A doctor might advise you to “run away” rather than risk being sued for malpractice.

A lawyer might tell you to get a signed release before you stop someone’s bleeding “just in case”.

A millennial might tell you to stand back and stream the whole thing to “boost your influencer numbers.”

This year I’m thankful because despite what I’ve seen, heard and reported, I’m still hopeful. I don’t believe we’ve reached the point where doing good is a bad thing.

Or the point where caring for others will ultimately work to our detriment.

This isn’t the time to gather as a family, then sit around the table and argue.

It’s one of those too-few times when we should refuse to the urge to debate everything.

You can fight anytime.

This weekend, instead of whining about what you lack, reflect on what you have.

You may find the one place you’re truly lacking is: thankfulness.

Not my normal mindset, either. A majority of my time is spent watching what sometimes appears to be a society unraveling - right before my eyes.

Remember this: since Thanksgiving 2020, we’ve come through another full year of “everything but normal” - yet, we’re still plugging along.

That’s lots more than the pilgrims had to celebrate their first Thanksgiving. More than half their friends and families had already died, but they weren’t quitting.

That example should still be enough for all of us to tone down the discourse, tune out the headlines and simply try to see the good things that really are happening every day.

I’m not looking at the news for at least the next 48 hours, but the wires will all be back next week and when we show up in your inbox, we’ll still be seeing our promise: we’ll keep you posted.