NRA Meetings NOT Quite Wrapped Up

This year’s National Rifle Association’s Annual Meeting & Exhibits, the one hundred forty-eighth gathering of the country’s largest civil rights organization, is over for the members. 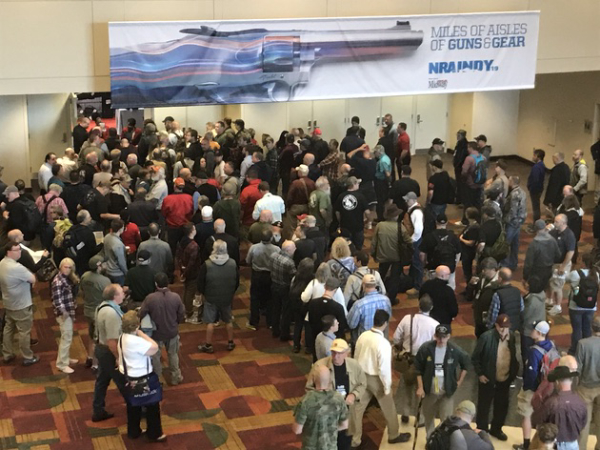 As members clambered to get into the Exhibits of the latest-and-greatest in the firearms industry, NRA leadership battled among themselves for control of the organization.

For the seventy-six members of the organization’s Board of Directors and its executives, today may be the heaviest lifting of what was a very heavy stay in Indianapolis. Despite Indianapolis having been a most congenial host, they’re not enjoying their visit.

This morning the NRA Board of Directors will convene what will be a very tough meeting. The Board knows it has to do something about issues that question their ability to protect the interests of the five million-plus members they represent.

The major question is whether they retain, suspend, or dismiss, longtime Executive Vice President Wayne LaPierre. It’s split the group into factions.

Once that question is answered, they’ll need to chart a course for the future that assures both members and regulators things will be different going forward, especially in regards to where the organization’s money is spent.

How they respond could have one of three outcomes:

All Boards are responsible for supervising operations of the organization, especially how -and where - the money’s spent.

For years, the NRA’s spending habits have been the subject of discussion.

After some of the things that have been alleged since the NRA filed suit against Ackerman McQueen, its largest service provider, indications are that even the wildest speculations will fall short of the actual spending when real numbers are laid out in a courtroom.

The Board’s need to act - quickly- to prevent a full-on crisis of confidence in the membership was brought home in Saturday’s Membership Meeting.

Attendees quickly noticed the unexpected absence of NRA President Oliver North when the NRA’s officers were introduced and took their places before the members.

Murmurs turned to stunned silence when First Executive Vice President Richard Childress assumed the duties normally performed by the president and began by reading a letter from North. It explained that following the exchange of a set of rancorous accusation letters to the Board of Directors by North and LaPierre, North had learned he would not be endorsed for a second term.

Consequently, he was resigning his presidency.

The letter repeated North’s allegations of serious problems inside the organization, and his call for a full - and immediate- investigation.

Suddenly even the biggest skeptics in the room realized the internal problems NRA officials dismissed as “fake news” or exaggerations, weren’t either.

And the backroom battle between Wayne LaPierre and his board supporters and other board members (including North) who believe LaPierre’s continued presence puts the very existence of the 148-year old organization into jeopardy became a very public fight.

Even the normally predictable Members Meeting became “spirited” when a motion calling for LaPierre’s dismissal was introduced.

It was defeated. But one NRA Board Member told me “this fight is far from over.”

Regardless of whomever has the top job when staffers return to Virginia headquarters tomorrow, it won’t be business as usual. And likely won’t be anytime in the foreseeable future.

New York’s Attorney General Letitia James, no fan of the NRA, had already notified the “the NRA, its charitable foundation and other organizations” to preserve their financial records.

Yesterday, Albany staffers confirmed that additional subpoenas (meaning others have already gone out) will go out later today. They tell me the subpoenas aren’t related to the legal fight already underway in New York over the NRA’s Carry Guard program.

The NRA’s now-public battle makes Ms. James the recipient of a significant political “gift”: as a New York chartered organization, she’s obligated to investigate the financial conduct of the organization she considers a “terrorist organization,” not a 501c4 not-for-profit.

Should her investigation uncover fiscal misconduct, she and Governor Andrew Cuomo will have a responsibility to act.

Simply distracting the NRA from the 2020 election cycle by redirecting its resources toward its own defense would be a tremendous boost for pro-gun control politicians- and Cuomo’s well-known aspiration for higher political office.

Whatever the outcome, it’s for certain the 2019 Annual Meeting won’t be one forgotten anytime soon.

The many positives coming out this year’s meetings have been tempered by a crisis that, at best, calls the capabilities, if not the credibility, of the organization’s leadership into question.

Like a majority of business-related questions, the majority of the answers will be obtained by one investigative technique: follow the money.