As far as we’ve been able to determine this weekend, the State Department’s announcement that they’re penalizing Russia by banning the importation of Russian ammunition and firearms has done absolutely nothing to bother Russian authorities. But it’s done plenty to anger American shooters and businessmen.

After all, banning the importation of Russian made firearms and ammunition because the Russian government poisoned opposition leader Aleksey Navalny, is on the surface, ridiculous. Dig deeper and you might theorize that it’s more a shot at American firearms owners than nefarious Russian officials.

US officials, as you can imagine, are denouncing that characterization, pointing out that there are also additional restrictions placed on “nuclear and missile-related goods and technology”covered under the Export Control Reform Act of 2018.

Sure they are, but the fact that around 40% of the steel ammunition purchased in the United States is Russian origin, it’s not a reach to say that it has more impact on domestic shooters than foreign officials.

“I feel this is more a restriction on ammo availability than any ‘sanctions’ on Russia,” says MKS Supply’s Charlie Brown, saying President Biden has “found a way of making his progressive anti-2A friends happy under the falsehood of ‘sanctions.’”

Brown should know. His MKS Supply imports Barnaul Ammo, steel cased ammunition from - you guessed it- Russia. Barnaul manufacturers over 200 varieties of hunting, sporting and self-defense ammunition for rifles, pistols and shotguns. Having shot a considerable amount of Barnaul product earlier this summer in South Dakota, it’s not the military surplus stuff most “serious” shooters sniff at. In side by side testing, we found Barnaul to be the equal of most premium ammunition at a lower price point due to the steel casing. 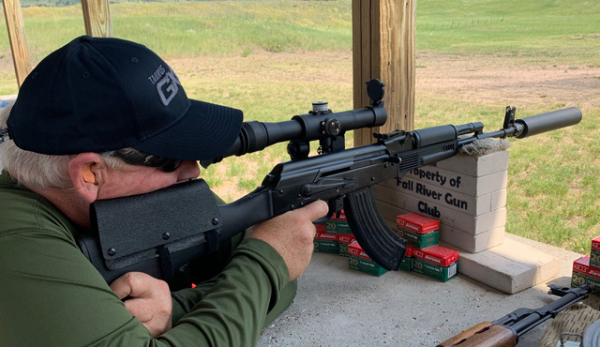 While testing rifles and ammunition in South Dakota (above), I had no idea that both the rifle and its ammunition (below) would be threatened under a sanction by the Biden administration. 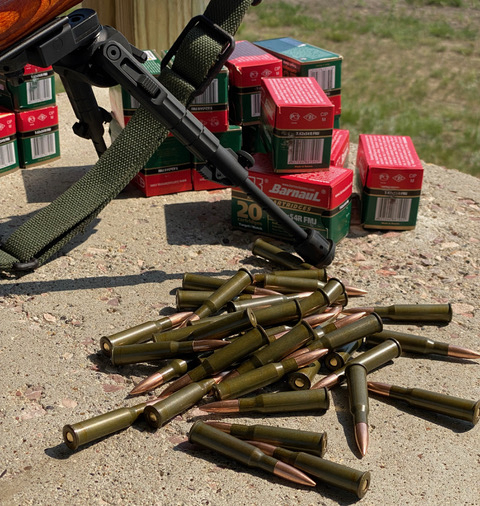 “This will hurt the US consumer and businesses of those who import ammunition, like MKS,” Brown said, “We are trying to get clarifications, but it looks like if you had approved form 6s, they will allow them to be imported.”

“But,” he said, “the Form 6s are only open for two years, so the short answer is we will have ammo for about two years, but it will kill any new calibers we had cooking. We were also planning on importing bullets for reloading, but that’s dead now, too.”

Dealers are reporting stepped-up demand for the now-endangered product. Consumers are reporting “the usual suspect” national retailers have already begun to increase prices in anticipation of lessened supplies and increased demand.

Moving On…. the list of companies making the decisions to pull out of next week’s NRA Annual Meetings & Exhibits continues to grow. As of midday Sunday, August 22, we know several major companies won’t be attending. Ruger, SIG, Smith & Wesson, H&K, Browning and FN are among the “majors” who have quietly admitted they won’t be attending. Others tell us they’re not planning on attending, but they’re not planning on advertising that fact any sooner than necessary.

But the 150th Annual Meeting will also be missing many smaller companies.

While their absence may only mean a small empty space in the exhibit halls, their absence is due to the big impact Covid could have on the companies themselves.

That’s why the decision is gut-wrenching on many levels.

As one company executive told me Friday, “after having attended the Bassmaster Classic in Fort Worth and seeing the uptick in covid around the country and especially in Texas, I backed out (of the NRA Exhibits).”

“For a company our size, it’s costly because you don’t get any funds back from the NRA when you do even as it relates to your concerns about Covid,” he continued, “Fortunately, the airlines are understanding -that helps considerably- and the hotels are only charging a $100 per room cancellation fee.”

Interestingly, the deciding factor was the announcement that his company’s largest OEM customer wasn’t attending, although being an “industry giant” (his words) they hadn’t officially announced it yet (and the “industry giant" has confirmed they won’t be attending, but refused to go on the record to affirm the decision).

In view of the challenges where the general public is able to attend, he’s made the decision to pull the plug on all consumer events, sticking to “industry only trade shows.” Last week, he tells me, he attended a wholesale show in Arkansas and the Mid-States show in Phoenix the week prior. Today, he’s attending the NBS Show in Forth Worth.

“I’m trying to reduce potential exposure for our company and still do business. That’s the world we live in now!”

Unfortunately, he’s correct. There is no ultimate right answer, and every answer appears to have an associated cost.

On a related topic, there’s an Outdoor Writers Association of America annual conference set for October 4-6 at Jay Peak Resort in Vermont. The state, OWAA reminds potential attendees, that’s “THE most vaccinated state in the union.”

Why’s that worth more than a casual mention?

Because while OWAA is magnitudes smaller than the NRA Annual Meetings, it is still preparing for as many eventualities as possible. They say the plan is to follow all CDC, state and local guidelines (meaning the rules will likely change several times before October 4), and vaccinations are “strongly suggested” for attendees. But, should restrictions dictate, they’re fully prepared to hold “the entire event outdoors if necessary, including meals and conference presentations.”

They say there will also be “ample space for social distancing within indoor venues.”

The most interesting wrinkle, however, is their idea of color-coding lanyards for attendee credentials.

Red, means “Please keep 6 feet away from me with masks on, I have vulnerable ones in my circle.”

And Green, means “Come in for the hug, I’m confident I won’t get or spread anything.”

There have been plenty of suggestions regarding how to actually let people know your comfort levels regarding the virus, but this may be one of the simplest and practical we’ve heard yet.