And as 2019 draws to an inevitable conclusion, I have a very brief report for everyone who’s been asking me “what’s going on with the NRA” several times a week.

Here’s the report: the year may end, but the litigation between the NRA and its former agency/partner Ackerman McQueen may outlive us all. In the last week I’ve read the filings from both parties in the litigation, and it’s enough to send a divorce attorney lurching toward the nearest bar.

Actually, it’s more like the Borgia family chronicles than litigation between two groups of adults. Replace the “he said-she said” with “the defendant alleges” and you get the picture. Up is down, black is white, right is wrong, and inside is outside-depending on which document you’re reading.

Central to all this, as he apparently insists on being in virtually every matter, is Wayne LaPierre. The NRA characterizes him as the ceaselessly crusading reformer, out to save the National Rifle Association from the Oklahoma hordes determined to loot the treasury, burn the building and at least savage the five million members. Ackerman McQueen draws a somewhat different picture: that of a man obsessed with absolute control of everyone and everything around him except his spending habits. There, he’s more like a drunken sailor on a short shore leave.

It’s ugly, it’s personal, and it’s likely going to get worse before it resolves itself. No one on either side looks good in this situation, and that’s about as positive a face as anyone can put on it. It’s also about all I can tell you without either speculating or presenting gossip as fact.

In other Washington news, it appears that guns have been shoved to the side as the Democrats have shifted their focus to the idea of impeaching the president. The President, I’m pleased to report, has told Second Amendment leaders (not just the NRA) that he’s not forgotten about the problem of violence in the country. But he is going to shift his focus from guns to the root causes of violence. He’s apparently decided that since nearly everyone across the political aisle is trying to find ways to get him out of office - other than winning an election- so there aren’t really any third rail topics out there he can’t address.

If he’s not distracted by all the clamoring for his scalp, he’s likely going to discover that even when politicians are all-in on one subject, they’re capable of shifting -temporarily- to other topics when it behooves them. And everyone who’s tried for decades to blame guns, not criminals or crazies, for crime will be interested in short circuiting that discussion.

What they’ve failed to recognize is that they’re not dealing with a Washington insider who’s looking to play by their rules. If you’re not looking to get along with the other “insider club members” when your term ends, it causes more than a little consternation.

And California’s raging wildfires are nowhere near contained. The Kincade Fire in Northern California’s Sonoma Valley, has burned more than 76,000 acres and is still only about fifteen percent contained. It’s already destroyed nearly 100 homes and more than 150,000 people -and 90,000 buildings remain under evacuation orders.

In Southern California, only the “extraordinary” efforts of exhausted firefighters saved the Ronald Reagan Presidential Library from the flames on Wednesday. While the Santa Ana winds have reportedly died down, there’s still a concern that embers from the still burning Getty Fire will be carried to other areas around Los Angeles.

My wife and I visited Napa/Sonoma a few weeks ago, and our flight into San Francisco certainly didn’t look like I my memories of the city. I remembered San Francisco as verdant green hillsides sloping down to the Pacific. After one of the longest droughts on record, it looked as thirsty as the areas around Phoenix in the summer.

Our trip to Sonoma wasn’t much of a change in scenery. The vineyards of grapes and olive trees were the lush green you’d expect as we were nearing “the crush” - the peak picking season for the grapes that have turned the sleepy area into a wine and tourism region. The farms and ranches around them, however, not so much. 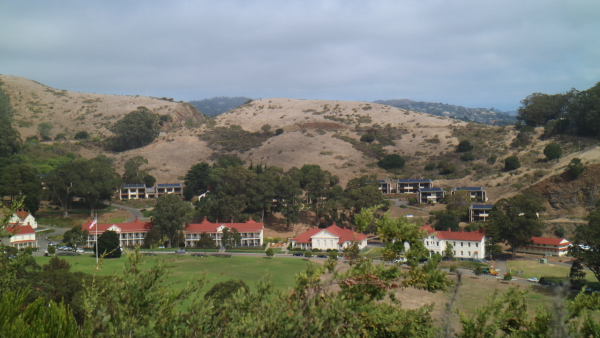 The hills just outside San Francisco show the effects of one of the longest droughts on record. Where there’s not watering, the ground cover is tinder dry. One spark can mean a catastrophe.

All through our visits, residents told us they were excited about the potential of the 2019 grape harvest, but very concerned that the wildfires could be even worse than the ones that devastated many of the vineyards in 2017.

Their premonitions were based on the same thing that enables farmers, ranchers and outdoorsmen to so accurately predict the weather: experience in the outdoors.

Unfortunately, the fires appear to have been exacerbated by something even the most experienced outdoors person can’t interpret: deliberate political choices that confuse a “green” agenda with responsible management of wild land. There’s not a lot of doubt that those management choices, which have banned responsible “burns” and forbids utility companies from truly clearing right-of-ways have made things worse, not better.

Our thoughts are with all our new acquaintances out there, but that doesn’t assuage our doubts at their failure to see -or accept- the consequences of their leaders’ failure to put public safety first.