9/11 made us think about the worst terrorist attacks on US soil ever. Most of us also think about what we were doing that day. I have a story for you about a California game warden that has ramifications beyond 9/11.

On Super Bowl Sunday, January 28, 2001, California Fish and Game Warden Zeke Awbrey was on patrol in the Imperial Valley desert of southern California. A former college athlete, Zeke was hoping to be through with his patrol so he could watch the Baltimore Ravens take on the New York Giants. Regardless, he went about his routine patrol checking fishermen along the American Canal. But on this day, he came upon something that he’d never expected to find. In his own words:

“I saw a lot of things when I was on patrol in the Imperial Valley – drugs, illegal immigrants, and human trafficking, but what I found on that day stands out vividly. I was contacting fishermen along the All-American Canal, an 80 mile-long aqueduct that brings water from the Colorado River to the Imperial Valley and nine cities. The All American Canal runs parallel to the Mexico-California border for several miles just north of Mexico. Over 500 people have drowned in the canal since its completion, most of them illegal immigrants. The canal has been called ‘the Most Dangerous Body of Water in the U.S.’

As I was checking fishermen for licenses and limits, I heard some gun fire in the distance. It was not just a few shots of a hunter, but more and more and more shots. And, I noticed that some of the shots were very close together, sounding like automatic gunfire.

I kind of did a buttonhook from where I heard the shots coming from and took to some higher ground where I could see across the valley. I parked and got out my binoculars and observed a group of people for 10-15 minutes. There were at least 20-25 of them. They appeared to be young adults, high school or college age, and some adults who were directing the shooters, helping them clear their weapons, and guiding them in skills training.

The adults were teaching combat skills. The students would get down on their bellies and crawl. Then they would shoot at targets, and belly crawl on the ground to get behind some cover. The drills were like we did in training, or the military would do. They just didn’t look right.”

Game wardens often work alone and in places where there is no immediate back-up. So, Zeke called the Border Patrol as they were his closest back-up, much closer than CHP or the Imperial County Sheriff Department. The Border Patrol came out right away. The sergeant and Zeke moved up to a viewing position, got out of their trucks and watched with binoculars.  “It was pretty obvious that this wasn’t right,” Zeke said, “especially the sounds of automatic weapons. so the Border Patrol went in first and secured the scene. I followed them in.”

“The shooters were Middle-Eastern, and they had just about every weapon you could imagine. All kinds of weapons, many that I’d never seen before. Some of their guns were SKS’s, AK-47’s and pistols I had never seen before in this country – a big variety of firearms. Most of them were Russian and Chinese-made. One of the weapons that I inspected was an AK-47. The first thing that I did was to fire the weapon. If you fire this kind of gun and you stop, you should hear a ‘click’ which means that it’s a semi-automatic.  If you don’t hear a click that tells you that it’s fully automatic, as it does not have to reset.”

The Border Patrol and Zeke interviewed the shooters. Zeke recalls, “The adults were very educated. Some said they were lawyers. They said that they felt that they’d been discriminated against because they were Middle-Eastern. But that was not the case. We were just doing a compliance check just like we would do for anyone  else like a hunter or a sport shooter.

“Not only did they have a lot of firearms, but they were training these younger people how to behave in combat, and they also had two vans loaded with ammunition. We interviewed them all and took down names and the Border Patrol photographed them. They had several AK-47’s that were fully automatic. We confiscated those at that time. And wrote citations.”

Zeke then went about his business and saw no more of the group training in the desert. 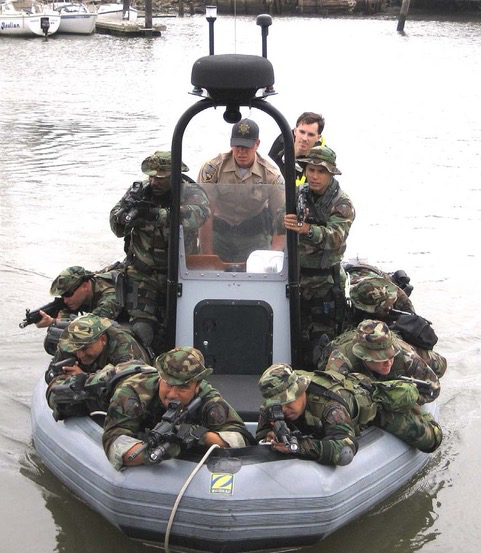 After 9-11, however, he ran into one of the Border Patrol sergeants out on patrol. “He told me that the information that he got from the FBI was that three of the subjects out of the 25 that we had interviewed were part of the five who flew one of the hi-jacked airplanes into the Pentagon on 9/11,” Zeke said, “The subjects were reported but to the best of our knowledge nothing came about from our contact with them.”

“It was our understanding that they had a legal right to be out there, just like other people who target shoot in the desert, but they had automatic weapons, which were illegal.”

Zeke has another more timely concern. “Where are the other 22,” he wonders,  “They could still be in this country. They could also be in Afghanistan, or even Iraq.  If they were training out here in the California desert on US soil, I can only imagine where they could be now, getting ready for their next target.”

(You can watch Zeke tell his story with a re-enactment as part of the documentary “Endangered Species CA Fish and Game Wardens. http://jamesswan.com/snowgoose/wardendoc.html )

To many, game wardens are “fish cops” who spend their days checking licenses and limits and looking for poachers. In reality in most states game wardens enforce wildlife law, criminal law, civil law and traffic law, as well as conducting search and rescue and cooperating with wildlife biologists doing field work. In California they are also Deputy US Marshalls. Wardens also do their own CSI in the field, as they work in remote places without backup. In some states they also don’t need a search warrant to search private property as wildlife are owned by us all. And they work patrolling on land, water, and in the air, in remote areas as well as major cities. They also may work covertly in plain clothes. And there are only about 8000 for the entire United States. New York turns out that many police for New Year’s Eve in Times Square.

As Zeke’s story shows, game wardens may also work on anti-terrorism. Right after 9/11 California game wardens worked with NOAA and the Coast Guard to patrol all harbors in the state.

As Zeke suggests, terrorists definitely may hide in wildlands. Earlier this year 5 people living in a compound in the high desert of northern New Mexico were arrested and charged with terrorist conspiracy. Supposedly they were going to target the FBI and US military.   https://www.npr.org/2019/03/14/703587964/feds-indict-5-new-mexico-compound-residents-on-terror-and-gun-charges 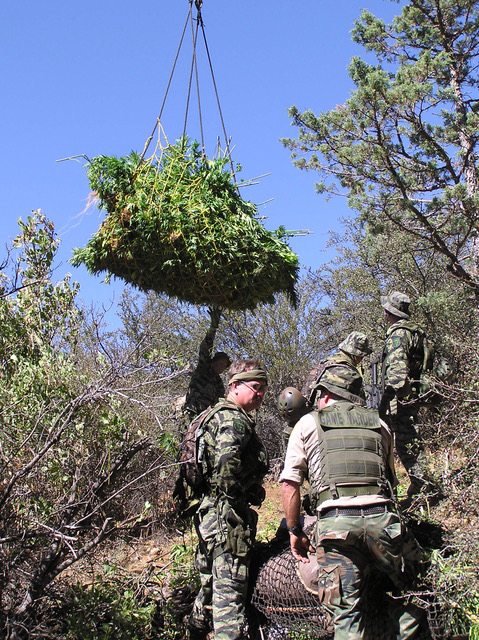 Wardens in the wild are increasingly coming across drug "grows" - to the point there's now the equivalent of a war being fought in the woods. Here, California wardens remove an illegal marijuana grow.

Also, wildlands are increasingly used by international drug cartels for growing marijuana and making meth. https://thecrimereport.org/2017/05/01/war-in-the-woods-game-wardens-battle-marijuana-cartels/  Stories about game wardens chasing down cartel growers can be found in a book, War In The Woods (Lyons 2010) written myself and Lt. John Nores. http://jamesswan.com/book-war_in_the_woods.html  The book has been optioned for a scripted dramatic TV show, “The Secret War,” which is scheduled to start shooting this year. We hope this will help get the message out there that wildlands are not always totally safe.

My suggestion is approach your local game wardens. Get to know them and maybe if you are lucky, ride along with them so you understand what they do and how important they really are to us all, as well as fish and wildlife.