In today’s news section you’ll see the National Shooting Sports Foundation’s confirmation of something that should be easy to accept: the firearms industry is doing far better than many industry segments.

Right now, companies are hiring; running at near capacity with little sign of slowing.

The average American’s awareness of the necessity to take personal responsibility for their family’s safety will keep the industry going. It will continue to spur growth as companies like Fiocchi and Springfield Armory (among others), announce expansion plans and break ground on new facilities.

That doesn’t mean it’s all rainbows and flowers.

In the U.S. House of Representatives, legislation designed to cripple the industry and its customers continues to come on a near-daily basis. Even the least harmless-looking bills have “gotchas” that would either criminalize law-abiding gun owners or make the purchase of guns and ammunition so tedious and restraint-ridden as to make it nearly impossible.

From restrictions on private sales to open-ended approval periods for NICS checks, you’ve likely heard, read or seen reports on just how bad these measures really would be for the industry. The reports are no exaggeration.

But they’re only potential threats.

There are real existential threats out there - today.

All the battles aren’t necessarily being fought by the major companies. Granted, all gun companies face the reality that access to capital is one of the few threats that could slow any-or all- of them down. But they’re all better prepared than the most vulnerable link in the retail chain: retailers.

With the exception of a few big retailers, the retail side of the industry is largely comprised of small businesses. In many instances, the owners manage the day-to-day operation. They’re not busy looking at how to score supply-chain efficiencies, they’re concerned with the job of satisfying customers already weary of looking for increasingly scarce product. 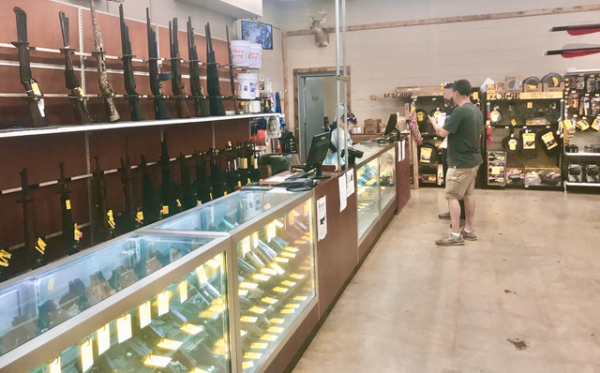 Not so very long ago, there were more products than customers. Today, many retailers find that situation reversed, and challenging.

They’ve faced pandemic challenges this past year, along with shortages of almost any consumer good imaginable, guns, ammunition or accessories. Shortages challenge everything from sales and cash flows to customer retention.

Despite the fact that credit card processing can cut -deeply- into already narrow margins, the ability to offer customers that convenience is essential.

If you don’t get the picture, imagine going to the grocery store or gas station and being told you couldn’t tap, swipe or insert your credit or debit card to pay your bill.

The Obama Administration tried to dry up access to credit -quietly- via Operation Chokepoint. They selected a group of “undesirable”” businesses, then put the pressure on big banking facilities to stop doing business with them.

“Chokepoint” was exactly that. It caused no small amount of problems for all the “undesirables”. Ostensibly, when revealed, the operation was shut down. But it was later disclosed that regulators weren’t seriously discouraging the practice. After the Trump administration took definitive action to protect the firearms industry, it appeared the chokepoint, if not removed, had at least been suppressed.

Yesterday, we learned that wasn’t the case.

In a conversation with the owner of one of the NSSF’s 5-start certified range and retail locations, I learned that on March 9, they were informed their credit card processing agreement with BillPay.com was being cancelled. They had only just established the relationship and made it clear throughout the certification process they were a firearms-focused business. That transparency included providing BillPay.com with a copy of their Federal Firearms License.

The process seemed relatively painless, although labor intensive, until they tried processing a card. It was denied.

At that point, owner Keith “Doc” Ruter reached out to the processing house. He was told that because of Chase Bank’s decision to have “nothing to do with the firearms industry” BillPay.com was closing the account.

“I tried to talk with them,” Ruter told me, “but they wanted no part of it.”

Fortunately, Ruter’s Access point-of-sale system from Gearfire could be modified to process his credit card processing and Smokin’Gun Worx was quickly back in business. “Gearfire got busy,” he explained, “and we were able to process on Gearfire.”

But not every retailer is a NSSF 5-Star facility like this one in Forreston, Illinois. We also learned than another facility (we’ve been asked not to name it) faced with similar challenges made the decision to close, effective April 3.

I spoke about the problem with Dan Edwards, owner of classicpaydirect.com, a company that helps find credit card processing for retailers- including those in the gun business. What I learned was that in many companies inside the merchant services industry “gun related accounts” are not wanted.

“They (gun businesses) are definitely not on the favored nation status,” Edwards told me, “many companies like FirstData have cancelled all gun related accounts -and that includes guns, accessories, whatever.”

For Evans, who got into the merchant services industry in 2010 after selling his previous company, the difficulty in finding reliable sourcing - at affordable prices- is one reason why he takes on the job of finding clearing services for gun-related companies.

“I’m a guy who grew up hunting, fishing, shooting,” he says, “and I wanted to get into the gun businesses. My goal is to help, and I’m determined to be a personal contact for these dealers.”

“I won’t go away,” he said, “and my goal’s always the same- to get every customer the best price on the best service possible.”

Unfortunately, it seems, gun-related businesses, despite claims to the contrary, are on the imperiled, if not endangered, species list with many of the companies that have taken on the values of the “cancel culture.”