While making a much-needed trip to the range last Thursday to work on my very-perishable shooting skills, I thought my eyes were playing a cruel trick on me. No, I wasn’t seeing two targets, and my front sights were no more fuzzy than normal without my prescription glasses.

Sitting on a shelf, without an armed guard watching over them, were boxes of .22 rimfire ammunition. Thinking it a cruel joke, I picked one box up to discover it actually had - wonder of wonders- .22 rimfire ammo inside. 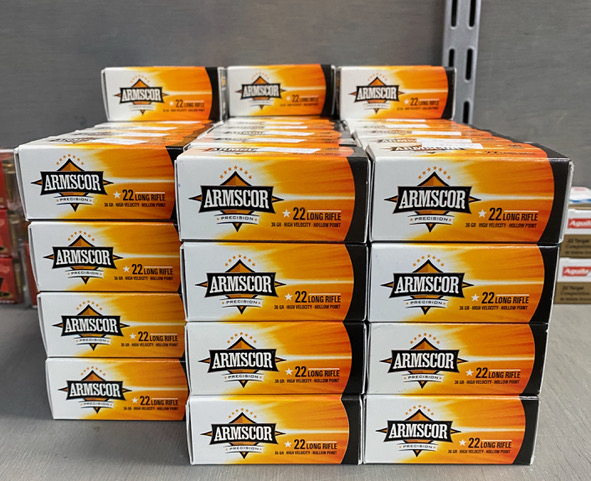 This isn’t a photo from our archive. It’s a smartphone image of what was sitting on the shelf at my range last Thursday. Not the brand I’d normally buy, but seeing any .22 rimfire on a shelf hasn’t happened in months.

“There’s no rhyme nor reason to what ammunition we’re going to get anymore,” I was informed.

“We don’t really complain, because it seems someone is looking for every caliber, regardless of bullet weight or any of the ‘normal’ requirements. Everything goes pretty quickly.”

As testimony, I was directed toward the .338 Lapua ammo. Yes, they actually had .338 Lapua, 6.5 Creedmoor, 6.5 PRC and 6mm Creedmoor on the shelves, although they explained the supplies had been dwindling-steadily- since word got out. Fortunately, I don’t need some of those “exotics” but I did lower the supply of 6.5 PRC. It was the first I’d seen in months. Yes, it was pricey, but “pricey” is a significantly better buy that a shelf with an Out of Stock sign.

As far as the .22 rimfire, it was priced ever-so-slightly under ten cents a round ($4.99 per 50-round box). Good enough for me to buy 1,000 rounds. There were no limits (other than your purchasing power), but plenty of other shooters are also been looking for .22 rimfire. A thousand rounds is sufficient to allow me to practice without sacrificing more of my dwindling supplies of centerfire pistol ammunition.

Is it the same practice as the 100 rounds of .45ACP I’d just fired? Absolutely not. The recoil and recovery of a .22 rimfire is nothing like a .45. But shooting 100 rounds of my newly-purchased .22 rimfire would cost just under $11 (tax included). Eleven bucks worth of 45 ACP won’t fill three eight-round magazines.

The fundamentals of good shooting aren’t changed by the caliber - but the economics certainly are.

This weekend I also took a trip to the New York Custom Knifemakers Show -without going to New York.

Wasn’t virtual, because this year’s show was held in Nashville -just down the interstate.

Seems the political atmosphere in New York and the Covid restrictions in New Jersey made it feasible for the owners to move their show to a more welcoming location.

So….welcome to Nashville. Here, masking mandates have loosened -significantly, and that freedom, plus a considerably more welcoming political climate, was sufficient to bring dozens of custom makers and potential buyers from around the country to the Music City.

In an effort to make our northern visitors more comfortable, mother nature turned the thermostat down from the sunny seventy degrees of Thursday to a considerably more brisk (and windy) 43 degrees. But the temperature outside did little, if anything, to cool the enthusiasm of buyers and sellers inside.

Knife shows are very interesting, but potentially risky events for me. I’m one of those people who gets excited at fine craftsmanship of any sort. From earthmoving equipment and airplanes to tiny pocket knives, functional tools that exemplify the craftsmanship and skill of their makers fascinate me. And a custom knife show is nothing if not a gathering of the finest craftsmen imaginable.

If you have, you know that accidentally cutting yourself isn’t the most serious slip you could make. Most of these highly-crafted knives are absolutely up to the rigors of daily use, but they’re more works of art than utility tools.

That realization was brought home to me during a lengthy conversation with Mark Zalesky, editor and publisher of Knife Magazine. While we were talking, he allowed me to see -and handle- several rare knives from his personal collection.

Zalesky literally “wrote the book” on bowie knives. His expertise, along with meticulous research has proven, and disproven, many claims regarding allegedly “authentic” bowies by famous early makers. Today, he’s working on a number of “projects” regarding historic knives, but it’s safe to say that he knows the bowie as well as anyone.

After showing me a couple of originals (they look more like butcher knives than the massive units he described as “more decorative than functional) that came later), he handed me another and asked me to look at the maker. Tiffany & Company, the maker of jewelry and other high-end finery today, made -and sold- many “sporting knives” including bowies in the nineteenth and early twentieth century. In fact, one of the most valuable items remaining in the Roosevelt family collection of items belonging to Theodore Roosevelt is a Tiffany bowie.

When I asked him what determined the value of an old knife, he surprised me with the answer. “More old knives are valuable for the memories connected to them than their actual value,” he explained, “that’s why it’s always tough to tell someone that the knife their great-great grandfather carried during the Civil War really isn’t something rare or remarkable. It has terrific value to them -but it’s the family history more than the knife they’re valuing.”

But he explained it was terrifically rewarding when he had the chance to tell someone their family heirloom actually was something of historic significance.

That’s why I’m describe myself as an accumulator. I will never be confused with a collector. For me, the story attached to an item is what makes it valuable. While I don’t know much about art, I appreciate the work of artists.