We also included what was, at the time it was written, a link to the full 94-page ruling courtesy of the California Attorney General’s office.

Our apologies to everyone who tried to read the full ruling, but it appears that at some point after we linked to the ruling, it appears to have been removed. 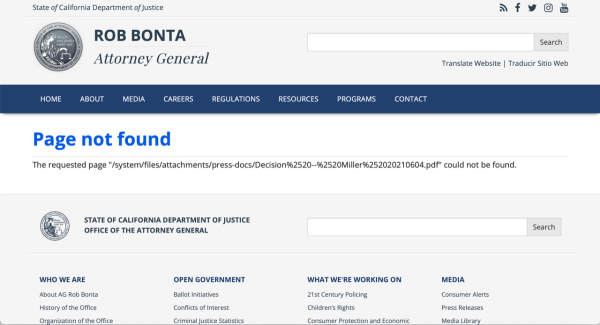 On Sunday, it was the place where we accessed the full ruling in Miller v Bonta. Today, it looks like AG Bonta isn’t advertising the chastisement. OWDN Screen Shot.

Here is a working link to the full decision, courtesy of the Second Amendment Foundation.

Seems they’re not a bit reluctant to share the ruling- and I don’t blame them.

Each of the several organizations behind Miller have spent significant amounts of time, energy and money to move the case through the courts. As a result, they have scored another significant win for the rights of Californians.

It would, however, be premature for those residents to begin shopping for a brand-new modern sporting rifle.

California AG Bonta requested -and was granted- a 30 day stay of the ruling in order to file an appeal.

In the meantime, California news outlets are either criticizing the ruling, Judge Benitez, or both.

To some, his continued usage of references to anyone from Ray Bradbury or George Orwell to the late comedian Rodney Dangerfield (Benitez writes “the Second Amendment gets less respect than he does”) detracts from the seriousness of the ruling.

Others go straight for the jugular, reminding readers that at the time of his confirmation, the American Bar Association rated him as “not qualified”.

That rating, they said, was based on interviews with lawyers and judges who criticized his “judicial temperament and courtroom demeanor.” Few mention that, despite that ABA rating, every sitting judge endorsed his nomination, and the Chief Judge went to Washington to testify on his behalf. Or that only one vote was cast against his confirmation.

They don’t like that Judge Benitez ihas consistently pitched California regulations that impinge on the Second Amendment. Miller is the third instance where he’s overturned existing California firearms regulations.

First, he wiped the state’s ban on “high-capacity magazines”. In April 2020, he ruled that requiring background checks for ammunition purchases was also a non-starter.

After a three-judge panel of the Ninth Circuit Court upheld his magazine ban ruling, the state asked for a larger number of judges to hear re-hear the appeal.

The background check case has already been heard by a panel of judges from the Ninth, but they have demurred any action until the magazine case is resolved due to “overlapping issues.”

Additionally, Benitez’ citing FBI crime statistics in this latest ruling has infuriated several of the already angry gun-control groups. Discovering that facts matter more than emotional arguments - at least in this particular courtroom - has them, admittedly “shocked”.

In Miller, for example, Judge Benitez cited FBI statistics showing that murders by knife are seven times more likely than murders via rifle. Further, a California resident was “three times more likely to be murdered by an attacker’s bare hands, fists, or feet, than by his rifle.”

But the fact that while his opinions are entertaining reading for laymen, they remain compelling enough to convince fellow judges to uphold them on appeal concerns them, and California officials most.

When it comes to the Second Amendment, California state officials are more than willing to pile rules atop rights.

In stark contrast, Benitez and his scathing rebuttals also carry have a common theme: the vigorous opposition to any attempted encroachments on the Second Amendment.

An insistence that arguments be proven rather than passionately argued has already led them to request another judge in a fourth gun rights case. But his repeated application of his very sharp with while dismantling their arguments may be the toughest thing for them to take.

The Ninth Circuit will hear the appeal on Judge Benitez magazine capacity ruling on June 22. As always, we’ll keep you posted.