If you’re thinking the outdoor industry seems unusually quiet right now, there’s a simple explanation: most of the executives and virtually all marketing staffs of companies that make gear useful for hunting are, literally, gone hunting. Unless your company’s involved in an acquisition (there are two transactions involving four companies in today’s news section), or find your business battling some ridiculous confiscatory regulatory challenge, you’re likely either in or headed to a hunting camp.

Hunting camps have been part of my life since I was a very small child. I’ve always loved them because they are where food is reduced to the basics: meat, potatoes, and sweets. Only liquor preferences come with more variety than a classic HoJo ice cream menu.

Behavioral standards are flexible. At most, beards grow unchecked, and standards for acceptable accommodations vary - widely. I’ve staying in some upscale ones with ice bars and gourmet meals and survived three days of horrible turkey hunting in a camp I generously described as a “rundown Motel 3”.

This year I’m not headed to any camp.

A couple of months ago, I found out I have Type 2 diabetes.

Nothing life-threatening, but I’m now living with a personal “No-fly” list of foods that include some of the essentials for a fun hunting trip. Hunting camp without potatoes, sweets and an occasional drop of liquor sounds more like punishment than pleasure, but that’s where I am at this stage in life.

Going to a hunting camp and not eating honey buns as a tide-me-over in a tree stand before enjoying a breakfast that includes sweet rolls or a dinner with baked potatoes slathered in butter before a sugary dessert is a temptation I’m not certain I could resist.

Don’t get me wrong, I like the new diet and the way I feel.

But it’s not really for hunting camps. It’s essentially the way I’ve eaten for several years, minus the breads, sweets and carbs that have apparently been making their stealthy metamorphosis into the deadly substance sugar.

But I’m working on alternatives that will make it possible for me to get back to camp next year.

Traveling via RV is no hardship. I simply load up the refrigerator/freezer with all manner of tasty, healthy food. 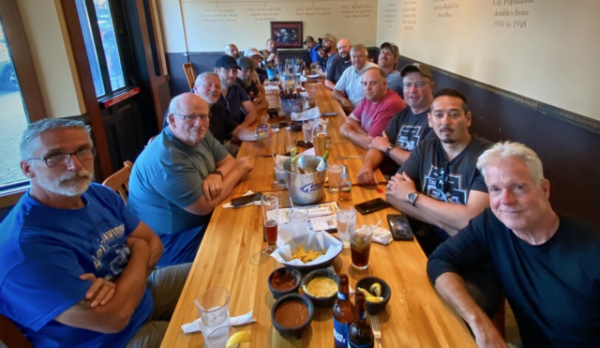 Traveling in a group can be hard, especially for group meals. Others with the same medical issue make it easier to resist temptation.

My late spring RV trip to South Dakota for Motoschutzen ’21 proved that I can travel via RV, be part of a group, and still eat healthy. I’d only learned about my diabetes days before that trip, so it was a chance to really get into the new diet.

I learned a couple of fellow riders had been dealing with the same situation for some time, so they because my coaches. They were instrumental in teaching me how to avoid the highs or lows blood sugar swings can cause. Dizzy on a motorcycle is not a good thing.

But travel without the RV is harder. Staying in hotels and eating healthy quickly proves that eating healthy costs considerably more than square meals on round buns. Reading “nutrition” labels quickly leads you to suspect the goal is to kill customers, not feed them.

Airport snack shops offer dozens of sources for sugar and caffeine, but that’s about it. If you don’t have time for a sit-down meal, there’s not a lot of healthy grab-and-go options.

Sometimes, your field tests don’t turn out the way you expect. I’d expected the Apex Protein Snacks to be something to gnaw on while sitting in a tree stand. Instead, I enjoyed them aboard an airliner. I was considerably higher than any tree stand, but the snacks did their job flawlessly.

For a trip over the Labor Day weekend, I found myself multi-tasking by eating samples of meat sticks and biltong from Apex Protein Snacks. They’d been sent to me as suggestions for my hunting pack, but I decided to put them into more immediate service, sticking a pack of Mesquite BB biltong and a Teriyaki flavor bison meat stick into my backpack.

When the airline gave me my “low-sugar” snack box, I was shocked to see just how different their definition of low sugar was from my medical guidance.

So, I dug into the biltong. With sixteen grams of protein and 0 grams of sugar per serving, a single serving (along with some diet soda) kept me satisfied during an otherwise food-free three hour flight. I saved the bison teriyaki meat stick (11 g protein/0 sugar) and the rest of the biltong for the return flight.

It wasn’t the test I had in mind, but I never planned on giving up lifelong staples. I’ve already ordered replacements for my Apex samples ($24.99 for 12 meat sticks and $7.99 per pack of biltong) so I’ll be ready for whatever form my next trip takes.