If I’d known what Phil Massaro knew, there’s no way I would ever have been out in the wilds of Montana. Massaro is a well-known writer, big-game hunter and, I’ve discovered, one of the world’s few true “experts” on hunting the critters that put the Big Five to shame.

Yep, Massaro’s an expert at hunting....dinosaurs. Or as he describes himself in his latest book “The Perfect Shot...for Dinosaurs” a “highly regarded paleontologist specializing in carnivorous theropods.” In other words, Hollywood’s favorite three-toe, meat-eating dinosaurs.

According to Massaro’s latest work, the sounds I’d heard in the Big Horn Mountains weren’t bighorn sheep battling for supremacy, they were the sounds of Pachycephalosaureses (a 2,623 point word in scrabble, FYI) in combat for their mating rights.

The perfect shot for the Pachycephalasaurus is not, as you'll understand if you read Massaro's tutorial, the brain. The noggin's so hard this creature is referred to as "The head butt that walks." Aim instead for that critical area around and behind the front shoulder (above). Classic hunting techniques work, even on these big boys. But a tutorial like his (below) is one that every hunter, shooter or science fiction/fantasy reader will browse and enjoy. 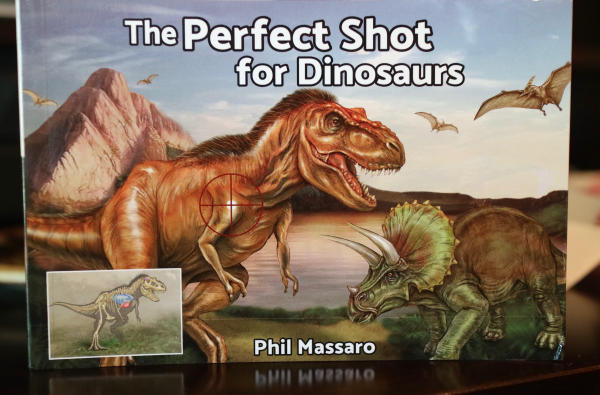 Yep, Massaro’s written the perfect little pocket primer for the hunter bored with the real- and in search of the unreal (or at least unavailable) critters of times long gone. He’s teamed up with artist Laurie O’Keefe to create one of the funniest semi-serious advice books I’ve read in a very long time.

While he’s using his author’s sense of humor in the premise, he’s also included a lot of his knowledge as an experienced big-game hunter in the ultimate game of hunting “what if” as in “what would we need if we could go hunt a t-rex.”

It’s an intriguing premise. Imagine having to hunt a creature that would dwarf the largest of the Big 5...with firearms that exist today. That’s what Massaro and the publishers at Safari Press have done with this latest edition of “The Perfect Shot.” We’ve see these sorts of tutorials for serious game, but what he’s accomplished with this book is to make the idea of reading about the “perfect caliber” much more fun than a simple hunting how-to.

It’s a heckuva fun read when you consider the cannons he’s suggesting. After all, as he writes “As if the .458 Lott wasn’t already a great choice for giant predators, Norma’s heavy bullets in its African PH Line make it even better.”

He’s using shoulder fired weapons...if his critters were real, I’d want something crew served that I could use from a point-blank range of say, 2,500 meters.

Massaro at "dino-camp" preparing for his next hunt. The setups are perfectly "straight" but the animals he's hunting are anything but.

The idea of “send-up” books aren’t all that unusual, but it is most unusual in a sport that takes itself “veddy, veddy seriously” to see on of its recognized experts having so much fun with the legitimate tools of the trade. From his suggestions for packing, tracking and whacking these long-dead behemoths to the fun photos he and his collaborators have pulled together, you’ll find that “The Perfect Shot for Dinosaurs” is an x-ring hit on two things: education about big guns, and fun.

No tricks, this one’s a treat.