After a few days of solitude, the sound of silence can be deafening.

So, I decided to: 1) get away from the television, radio or news sites for a few hours, 2) find something to “do” on my workbench.

Ordinarily, spare time is an excuse to get outside. Major thunderstorms discouraged that, so I decided to hit the garage/workbench instead.

I found a mess.

My workbench was buried under stuff. Parts, pieces, boxes, tools and assorted things used, then not put back in their assigned spaces. That little pick up/put up/straighten up project morphed into maintenance as I picked up an EOTech sight and realized the battery was dead. Based on the presumption that other power tools were likely in the same situation, my first project pretty much self-selected.

Over an hour later, I had done replacements on a few pieces of gear. Fortunately, none of them had done the old-school battery leak. Having lost a few cheap flashlights to battery corrosion, I was more than happy with the job of changing out much more reliable, longer-lasting batteries —even if they’re significantly pricier.

After all my optics were up and functioning, the remaining batteries in my spares inventory were all verified or tossed.

The changeovers reminded me why there’s no substitute for having a good, multi-voltage battery tester. Testing anything AA to AAA to 9-volt and lithiums of all shapes and sizes from CR123s to button-sized 1632s make that point quickly.

In the course of straightening the bench, I came across a couple of dull knives. I’m not good at sharpening knives, so I use one until it’s dull, then pull another from my assortment of knives

When I spotted a favorite, I pulled out my secret weapon for knife sharpening -a Work Sharp Knife Sharpener (worksharptools.com). I bought mine several years ago because I’d been told that “even I” could sharpen a knife using it.

It’s true. I’ve sharpened everything from pocket knives to bayonets, scissors, axes and lawnmower blades. After plugging it in and sharpening my knives, I got busy and sharpened my lawn tools, too. Eventually it will stop raining; then I’ll find myself in hand-to-weed combat.

From there, I moved on to the project I’d had in mind when I decided to visit the workbench.

Since getting one of Ruger’s Charger 9mm pistols, I’ve been trying red-dot sights, slings, and folding arm braces.

But I haven’t been able to get personal clarity on whether this Charger is the continuation of Ruger’s long-established Charger .22 caliber line into centerfire calibers, or it is the pistol version of their equally-successful PC Carbine line. I own and enjoy both.

But I struggle with the 9mm Charger’s “pistol” description like I do with AR-pistols.

They’re pistols, like a maharajah’s howdah. Ungainly at best, unmanageable for many.

They’re shootable in the split-grip SBR rifle position, when using an arm brace, or “pushed out” against a sling.

Being an all-in proponent of the two-handed pistol technique, I’m not advocating going back to the old one-handed style for practical shooting. But I grew up watching cowboys protect the west using pistols fired with one hand. One of my core beliefs is that a pistol can be fired accurately using only one hand.

The Charger 9mm, like the AR-pistols, isn’t exactly handy in that pure pistol position. Its aluminum chassis is essentially a 9mm PC Carbine, sans stock.

No one’s going to mis-categorize that chassis in the small, light pistol category. 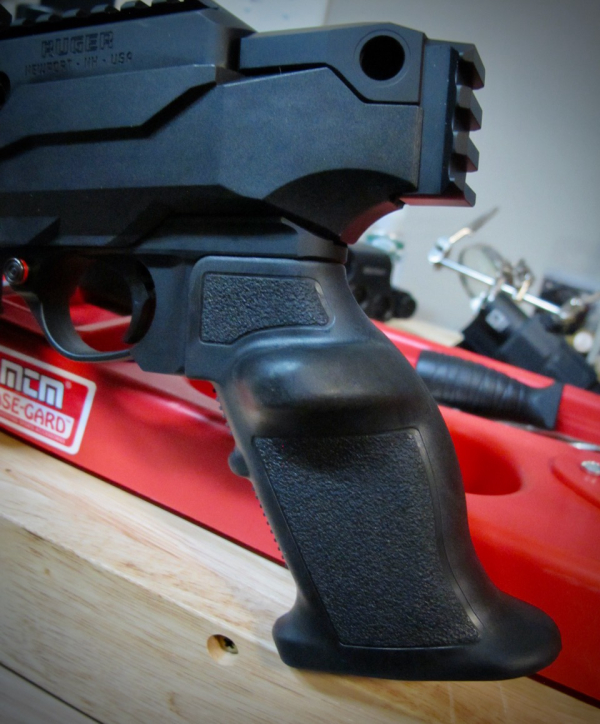 Luth-AR’s Chubby Grip(above) is designed to give rifle shooters a solid, repeatable hand position. The principle’s the same on the Charger 9mm pistol, except the increased grip area encourages a more firm- and stronger- hand position. It works, even though the result looks a little off-center (below) Jim Shepherd/OWDN photos.

Yesterday, in a box of assorted AR “stuff” by my tool bench, I found a solution.

And it was a simple fix.

The Chubby is designed to give AR-shooters a very consistent, more ergonomic grip. After running a Chubby on my long-distance 6.8 PRS rifle, I know it works.

Since the Charger 9mm takes the same AR-style grip I thought, why not?

If it didn’t help, putting it back into the stock configuration wouldn’t be tough. There’s not much chance I’m going back to the stock grip.

The thumb rest and palm shelf lock my hand into the same strong position every time I grip the gun. It improved my long distance shooting by simplifying my setup. Grip it firmly my shooting hand and trigger finger are in solid positions.

The same Chubby grip that makes my rifle grip more stable also gives more surface area into contact with the grip on the Charger.

More surface area means a firmer grip. Plus, the thumb shelf gives me additional leverage to make my one-handed grip even more stable.

Granted, the shape of Luth’s Chubby is different -and the Charger looks a bit off-kilter when viewed from the rear. But that’s OK.

My goal was to make it more accurate, not more attractive. I have some ideas on that, too, but they’re for another time.