Guess what? The internet is dangerous for us, our wallets, and our sanity.

Online, people mislead us, lie to us, and manipulate us to take our money, suppress our opinions, and incite disagreement amongst otherwise friendly groups. It impacts us as hunters, consumers, retailers, and private citizens. It hurts our sporting lives, professional lives, and, yes, our personal lives.

Unfortunately, hunting and fishing are susceptible to the same online threats that other activities are," said Ryan Brown, executive director, Virginia Department of Wildlife Resources. "In many ways, I believe that we have been quite lucky over the years; the outdoors community is a very trustworthy family, and we've probably been somewhat insulated from the online scams that have become common in other sectors. But that doesn't mean that we are immune from the same issues that we see popping up elsewhere."

There's no debating the existence of these digital predators and pitfalls, so I wanted to take some space in our collaborative Voice of Leadership Panel to educate and inform us all about the global war of information manipulation. As G.I. Joe said - knowing is half the battle. So, let's start with the basics. I want us to understand the why and how at the most general level so that we can all understand and then apply our knowledge to all aspects of our digital lives.

According to the Department of Homeland Security's Cybersecurity & Infrastructure Security Agency (CISA), "misinformation misleads. It is false but not created or shared to cause harm. Disinformation deceives. It is deliberately created to mislead, harm, or manipulate a person, social group, organization, or country. Malinformation sabotages. It is based on fact, but used out of context to mislead, harm, or manipulate."

We can imagine many different scenarios within the hunting community where these three words apply. From Facebook feeds to newspaper articles to campfire chatter, what we say and why it helps define who we are and what people think about critical issues, communities, and each other. What is said to us, even more so? In fact, in 2020, the National Shooting Sports Foundation published an article to help firearms industry folks combat social media misfits titled - Fighting Social Media Trolls – And Coming Out Smelling Like a Rose.

Ah, social media. As we know, there are many fake people out there. No, I mean fake as in they're not people. They're bots. What's a social media bot, and why do I care?

CISA stated that "social media bots are automated programs that simulate human engagement on social media platforms. As they become more prevalent and better at mimicking human behavior, the potential impacts — helpful and harmful — expand. Social Media Bots use artificial intelligence, big data analytics, and other programs or databases to masquerade as legitimate users on social media. Depending on their function and capability, they vary: Some are helpful, like chat bots and automated notifications, but some can be used to manipulate real users. When misused, Bots can amplify disinformation and distort our perception of what's important, polluting or even shutting down online conversations."

Like most anything else, there are good bots and bad ones. What do the good ones do for us? Based on information obtained from CISA, they help with:

The bad ones hurt us with:

Social media bots infest our news feeds, whether it's on Facebook, Twitter, TikTok, or others. So, what kinds of things do bots do? According to CISA experts, they:

Social media bots do quite a bit, and they aren't unionized. They don't get tired, grow conscious, or need to be fed Starbucks and muffins. So, one of the best things we can do is know how to identify them.

How to Spot a Bot (CISA)

Other areas on the internet where we can be victimized include the use of fake websites, forgeries, and manipulated media.

What is a fake or proxy site? CISA stated proxy websites are fronts for malicious actors designed to launder their disinformation and divisive content or use that content to drive website visits. These sites are not developed to provide authentic information. Following high-visibility events, these sites will crop up to take advantage of the public's legitimate desire for information. Be cautious of sites that have unclear origins. Both the information and its sources should be trustworthy. Clues like misspellings in a URL can indicate before even visiting a website that it may not be a trustworthy source.

I recently had a conversation with Weatherby's Zach Hein to address his concerns about fake websites for Weatherby customers and everyone in the hunting and shooting industry.

"Con artists and scammers will always find a way to take advantage of the unsuspecting, so some extra vigilance goes a long way, "said Hein. "We've been urging our customers to be very sure that they're visiting and purchasing from weatherby.com – there are spoof sites out there whose entire goal is to fool people into thinking they're on our site, but a simple check of the web address will show that it's not weatherby.com. We thought we were being targeted when we first became aware of the sites impersonating our company. Sadly, it's much more widespread than that, with similar spoof sites present for more than a dozen companies across the firearms industry."

Hein, who was alerted to the issue of possible fake Weatherby sites, or sites where people were misled to think they could buy Weatherby products, was proactive in alerting customers to the dangers of fake websites.

"The biggest red flag for a con of this type is the method of payment," said Hein. "At Weatherby, we'll only take payment online through a secure credit card processor, while the spoof sites tend to ask for payment in cryptocurrency or through money transfer apps like Zelle. If a site is asking for payment in such a manner, run the other way. There are all sorts of other inconsistencies that folks can keep an eye out for, from outdated or non-standard logos to long-discontinued products being 'in stock' and even non-Weatherby rifles pictured in lifestyle images. The warning signs abound if you're looking for them, but with a firearms market still in a state of scarcity, sometimes folks don't pause to consider the possibility that things are not as they seem."

Hein stated he was aware of other industry partners who have had similar fraud issues. Everyone is trying to stay one step ahead of an ever-advancing digital criminal element so he reached out to Mark Oliva, NSSF’s Public Affairs Director, to alert them to what Weatherby was experiencing which resulted in NSSF issuing the following NSSF Member Alert -

NSSF® has learned from several industry firearm, ammunition and propellant manufacturers of bogus websites and web scams aimed at consumers who are eager to purchase these high-demand products. NSSF warns consumers to take steps to confirm the websites they are using are legitimate. If you believe you have been the victim of a fraudulent transaction, NSSF encourages you to contact the FBI or ATF, or file a complaint with the Federal Trade Commission either online or by calling 800-382-4357 (800-FTC-HELP). For additional information, please visit https://www2.nssf.org/e/127421/online-safety/4dd45k/531133124?h=6hubucaeCi5Z4DuUw8o4XLUHmMbJlKOJnMy863DMmXc.

Hein made sure to communicate with me, and anyone else, that Weatherby is always the best source to confirm Weatherby questions.

"No matter what, if a customer has a question or concern, we will welcome them to call us at 307-675-7840, and we can point them in the right direction," Hein said. "In the meantime, we'll continue to do all we can to get these scam websites using our likeness and products taken down."

There’s more everyone. Another tactic we have to defeat or avoid altogether are imposter sites, emails, and other forms of digital communication known commonly as forgeries.

CISA defines forgeries as forged artifacts typically featuring fake letterheads, copied and pasted signatures, made-up social media posts, and maliciously edited emails. Such forgeries are made and distributed for various malign purposes. To make them more credible, forgeries are often presented as obtained from a hack, theft, or other interception of documents—they purport to be "leaked" materials. Stay vigilant. Forgeries can be packaged with authentic content to lend it credibility. If the forgery appears to be groundbreaking news, check reputable news sites to see if they cover the event.

One instance of this was a series of emails I got from what at first seemed to be the Virginia Department of Wildlife Resources. It wasn't. 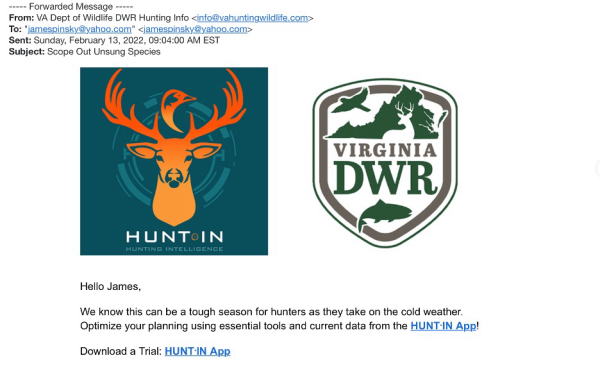 I reached out to Virginia DWR to alert them, and they responded promptly.

Director Brown was able to tell us more about this incident and how his agency addressed it.

"This past winter, we and other state fish and wildlife agencies saw our licensees marketed to under the auspices of partnerships that weren't legitimate," said Brown. "We quickly enlisted the help of our state's Attorney General's Office and were successful in getting the activity to stop. We also did what we could to let our constituents know through media and social media that the solicitations they were receiving weren't from us. We'll continue to keep our eyes out for improper activity that could target our constituents. But just as in dealing with banking or retail sales online, there is always a need for the public to also be very vigilant in all online activity. When it comes to license purchases or other transactions, those are always conducted through our official websites (dwr.virginia.gov or gooutdoorsva.com) or our agency app, and I believe other state fish and wildlife agencies are the same. We won't ask you to purchase a license through any other site, so come straight to the agency when you're ready to head to the field."

Virginia's Department of Wildlife Resources issued a press release on Feb 15, 2022, to help socialize the issue.

Unfortunately, criminals don't stop with just emails. Even seeing isn't believing anymore. Online we have seen all kinds of fake and manipulated forms of media. From altered gun images to digitized video edits of speeches and many other issues. If the media can be created, it can be altered to support any narrative.

According to CISA, the quality of manipulated audio/video varies. Some fakes are detectable on closer examination while uncovering others will require special software. On its own, this content can be convincing. Check with multiple sources to confirm its authenticity.

The internet can and should be an excellent source of social connection, marketing, education, and commerce, and it is. It attracts a global community of criminals and social disrupters who can wreak havoc on our peace of mind and our wallets. I hope the education, awareness, and examples entirely in this short article can help you avoid becoming a victim of internet trolls, pickpockets, and hacks.

— Jay Pinsky
Pinsky is editor of our companion service, The Hunting Wire

Editor's note – All technical data, including definitions and tactics, were sourced from the Department of Homeland Security's Cybersecurity & Infrastructure Security Agency (CISA). To learn more, visit them here - https://www.cisa.gov/mdm