A warrantless search and surveillance practice used by wildlife agencies to investigate hunting and fishing violations was ruled unconstitutional last week by a Tennessee circuit court; paving the way for property owners in several other states to challenge criminal charges resulting from such techniques.

In 2018 Benton County landowners Terry Rainwaters and Hunter Hollingsworth sued the Tennessee Wildlife Resources Agency (TWRA) after they discovered a video camera with a 24/7 live feed installed on a tree on Hollingsworth’s property, which was marked with no trespassing signs. Rainwaters claims the agency also engaged in warrantless searches on his property.

They were represented by the non-profit public interest law firm Institute for Justice (IFJ). According to IFJ Attorney Josh Windham, the ruling may impact 16 other states that have Constitutions with property protection language, but allow wildlife agencies to conduct warrantless searches.

The IFJ argued that TWRA’s warrantless searches on private property violate Article 1, Section 7 of the Tennessee Constitution. TWRA contends the U.S. Supreme Court precedent, known as the “open fields doctrine,” overrules the “reasonable expectation of privacy” on private property deemed to be an open field, or other property outside the immediate vicinity of an owner’s home or yard.

TWRA’s attorneys contend wildlife officers must have the flexibility to enter private lands to protect wildlife and enforce hunting, fishing and boating laws, and said the vast majority of hunting there takes place on private property.

“General warrants are dangerous to liberty and ought not to be granted,” the court ruled. The law, the judges wrote, gives rise to an “intolerable risk of abusive searches” and violates the Tennessee Constitution’s property protections. It is “unconstitutional, unlawful and unenforceable,” they ruled.

Despite the Circuit Court’s ruling, Open Fields power remains in place for federal officials. In this incident the Tennessee game warden was accompanied by a U.S. Fish and Wildlife Service agent. 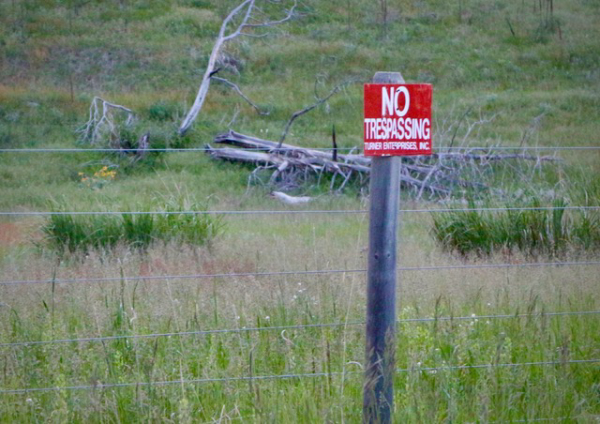 While the Tennessee case can still be appealed, it will doubtless be used as reference material in other states where landowners and wildlife officers have disagreed over the reasonableness of what is essentially legalized trespassing. Jim Shepherd/OWDN photo.

The Tennessee Attorney General’s office did not return messages this week to comment, but is expected to appeal the case.

IFJ is also representing two Pennsylvania hunting clubs challenging warrantless searches on their properties. The Punxsutawney and Pitch Pine clubs are located in the Allegheny Mountains on private land marked with no trespassing signs. Several members have had encounters with wildlife enforcement officers over the years.

Like the Tennessee case, the clubs are suing under Article I, Section 8 of the Pennsylvania Constitution, seeking a declaratory judgment that the statutes authorizing warrantless searches are unconstitutional.

According to Windham that statute is supposed to protect private property, including “possessions,” from warrantless searches. But in 2007, in a case called Commonwealth v. Russo, the Court held that the term “possessions” does not apply to private land. IFJ contends the term “possessions” was used widely in the past to describe privately-held lands.

“In this case we are asking the Supreme Court to overrule Russo -- the case underlying Pennsylvania’s warrantless search regime --- and to reject the federal open fields doctrine.

If successful, Pennsylvania would join Mississippi, Montana, New York, Oregon and Vermont as states that have firmly rejected the doctrine,” said Windham. “A victory in Pennsylvania would also send a strong signal to other state high courts, and even to the U.S. Supreme Court, that they too should reject or reconsider the open fields doctrine.”